A 142-foot-long bridge installed last fall over the Tahquamenon River just got an important addition: a name. Friends, family, Michigan Department of Natural Resources officials and other colleagues gathered at Lower Tahquamenon Falls this morning to dedicate the Ronald A. Olson Island Bridge, honoring the man who heads the Division of Parks and recreation of the DNR as chief for 17 years.

The all-aluminum fabricated pedestrian bridge at Tahquamenon Falls State Park, located in Paradise on the eastern Upper Peninsula, officially opened over the Memorial Day holiday weekend. The bridge itself is an apt symbol for Olson, who has built his career on bringing people together and encouraging them to aim for places they can’t yet see.

“When it comes to opportunities in parks and recreation, no one is better at building bridges and bringing people to the table than Ron Olson,” said DNR Director Dan Eichinger.

“Ron lives and breathes Michigan’s state parks, trails and waterways, and he will talk – and listen – to anyone, anywhere about ways to protect and enhance these precious resources. so that every resident and visitor can enjoy them and be inspired to love them as much as they do,” Eichinger said. “I’m proud to be here today and to share in this well-deserved celebration of Ron’s remarkable contributions.”

The name plaque installed on the bridge reads: “Ronald A. Olson Island Bridge. In honor of his dedication, hard work and accomplishments with the Department’s Parks and Recreation Division of Michigan Natural Resources.”

His accomplishments are numerous. Olson, who oversees a parks and recreation system that includes 103 state parks, nearly 1,300 boating access sites, 13,400 miles of state-designated trails and 82 state-sponsored ports State, has: 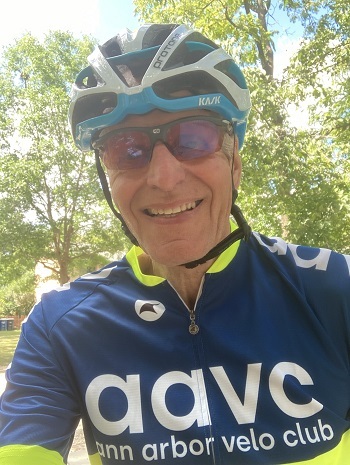 The department’s natural resources assistant, Shannon Lott, said that since Olson joined the DNR in 2005, he has approached the challenges and opportunities in the recreation world in his own way.

“Many of Ron’s staff talk about how Ron sees things differently: not as they are or how they have been, but what could be – in fact, what should be – to solidify the parks of ‘state, trails and waterways as relevant, even revered, to every Michigan resident and visitor,” Lott said. “All of Ron’s decisions are guided by the goal of creating the best experiences for visitors, but in a way that protects natural and historic resources and gives employees the opportunity to grow and succeed.”

One such example stems from Olson’s observation of the park’s aging infrastructure, changing trends in camp accommodations, and staff seeking more work hours. This simple intersection of needs has allowed seasonal rangers to extend their employment season to help build tiny homes and reinvent the mini-cabins that are now among campers’ most popular lodging choices.

His passion and contributions have not gone unnoticed. Other honors include:

Not content to rest on his laurels, Olson also works hard to pass on his knowledge and experience to the next generation of parks and recreation managers.

He has served on the board of directors and as an instructor at the National Parks and Recreation Supervisor Management School, served as regent and instructor at the NASPD State Park Leadership School, and has presented numerous educational sessions at National and Michigan Conferences of NRPA and other state parks and recreation conferences and training institutes. 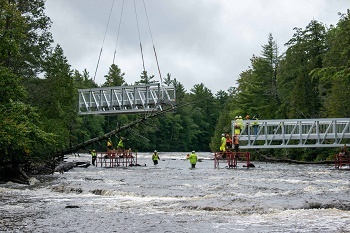 Installed September 2021 at Tahquamenon Falls State Park, the 142-foot-long span was built in Florida and its four sections were lifted into place using a helicopter.

The bridge now provides improved access for anyone who wants to see the river or visit an island in the middle of the Lower Falls rapids.

Other elements of the bridge project include 350 feet of boardwalk connecting the mainland to the bridge abutment location and a half-mile barrier-free trail around the perimeter of the island, dotted with sections and benches of additional walk. Capital funding from MNR’s Parks and Recreation Division paid for the entire $1.28 million project, including bridge and accessibility improvements.

Note to Editors: Accompanying photos are available below for download. Caption information follows. All photos are courtesy of the Michigan Department of Natural Resources.